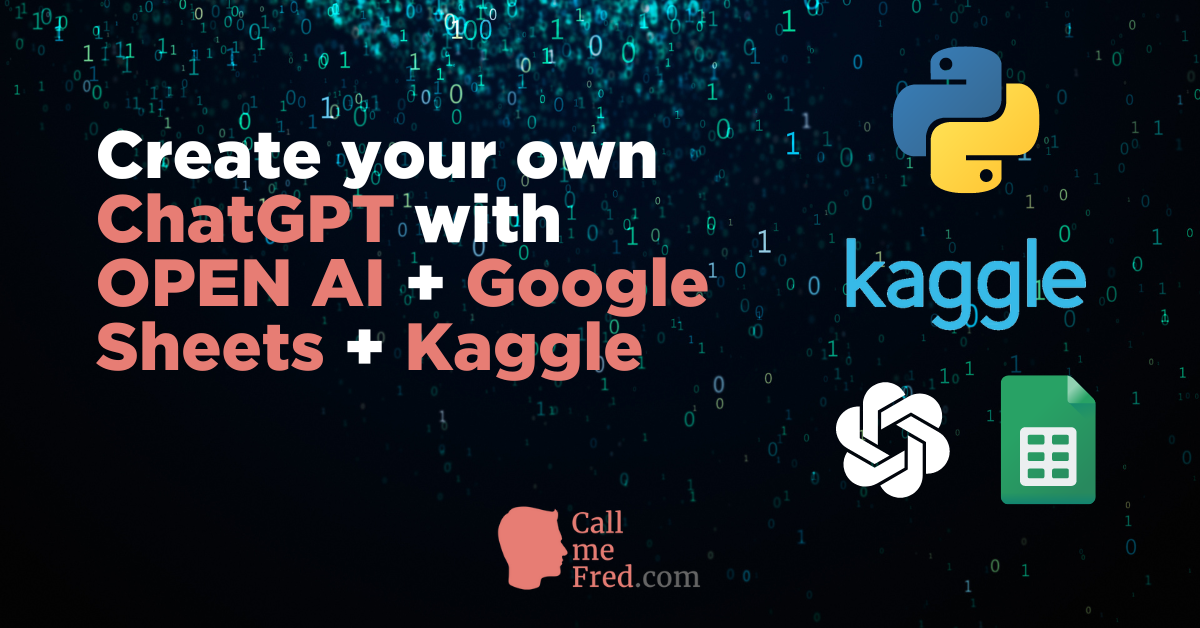 ChatGPT is all the rage. Everyone has started using the conversation AI interface released in November 2022 by OpenAI.

While it provides a great UI for casual one-off conversations, it’s not the ideal environment if you want to process data in bulk.

You can of course try to develop some form of browser automation but it’s not reliable and, if you’ve been frequently using ChatGPT, you’ve noticed that answers tend to be slow, with a capped daily volume per user.

It’s much better to connect directly to the OpenAI API via Python. In my article for Python beginners, I explained various ways to use Python on your Mac. You can either use it locally or in the cloud, via Google Colab or Kaggle.

I have developed some Python scripts connected to OpenAI in PyCharm but for a recent project, I needed to share my code with a collaborator.

I first started to transpose my script into a Google Colab notebook. It worked fine but this morning, after leaving the notebook idle for a few hours, I noticed that my creds.json file used to connect my script to Google Sheets had disappeared from the side panel.

And when I tried to run the import commands in the first cell of my Google Colab notebook, I got an error. The packages (openai and gspread) had also been removed from my Google Colab instance.

👉 Here’s the explanation: when using Google Colab, any files you upload will not be permanently available. Colab is a temporary environment that has a 90-minute idle timeout and a 12-hour absolute timeout. This means that if the runtime remains idle for 90 minutes, or has been active for 12 hours, it will disconnect. When this happens, all variables, states, installed packages, and files will be lost and a new, clean environment will be created upon reconnection.

How to work with persistent files and packages in a hosted Jupyter notebook?

Fortunately there’s a way to keep persistent files AND packages in a hosted Jupyter Notebook: you can do it with Kaggle notebooks!

In the Settings side panel, you have the option to make your variables and files persistent.

You could install your packages via a quick ! pip install command in the first cell of your Notebook but those packages would not be persistent. In order to have them forever at your disposal, you need to go the extra mile with a more sophisticated command.

This will install openai and the required dependencies under mysitepackages in the side panel. It takes a little while but all those packages will then be persistent.

You can do the same for gpsread and oauth2client (which we’ll need to initialize the Google Sheet connection).

After the installation of openai, gpsread and oauth2client in a persistent way, you can safely delete the cell (TIP: by pressing dd while on the highlighted cell) and insert the following code into the first cell, which will connect your notebook to mysitepackages, as well as the import commands for the packages.

How to use your OpenAI API key in Kaggle?

Next we need to safely store our OpenAI API Key in Kaggle.

In the ADD-ONS tab of the menu, you’ll find the SECRETS section.

Simply add your OpenAI API Key by giving it a label, such as openaikey. Let’s keep things simple 🙂

Copy paste the code snippet at the bottom of the screen and add it to the first cell of your notebook. Also import time, os and json.

This will be the final content of your first cell.

In the second cell, we’ll connect to the Google Sheets API.

You’ll notice “creds.json” in my code. That’s the name I gave to the JSON file containing my Google Developer Account private key. I uploaded this file via the Kaggle side panel.

👉 In my article dedicated to Python + Google Sheet, you’ll find the detailed tutorial to create your own creds.json file.

👉 It’s a good moment to remind you to check that your Kaggle Notebook is PRIVATE (that’s the default setting).

In the next cell of your notebook, create a function to use OpenAI in Kaggle. You can fine tune the parameters (max_tokens, etc.) by following the recommendations of OpenAI.

You can test that everything is working fine by running this code in your next cell.

It should print out (at time of writing): The current president of France is Emmanuel Macron.

Now we’ll connect the Kaggle notebook to our Google Sheet. Python Connect is here the name of my demo sheet.

More info about connecting Python to Google Sheet in my detailed article.

Now you can iterate on the rows of your sheet to ask a series of questions to GPT-3 via the OpenAI API.

Let’s say for instance that you want to get a list of Things To Do in a particular city. And you have 2 cities in your sheet, located in cells A2 and A3, London and Paris.

The answers will be published in a snap in column B.

You can ask further questions related to the same cities and insert the answers in other columns.

For instance, let’s add a question to list key historical facts about each of those cities.

Here’s a potential output (if we don’t comment out the “activities” question, GPT-3 will override the first suggestions).

Now, let’s imagine that you want to write a short marketing presentation based on the historical facts but without re-running the script for the Things To Do and Short History columns.

You’ll simply add a prompt to the same cell, comment out the 2 initial questions, declare the history value based on the content inserted in column C, and rerun the cell, like this:

Which gives us the following output for London and Paris

Be creative, have fun (and always check the facts suggested by the AI)!

If you need any help to create your scenarios, feel free to contact me.